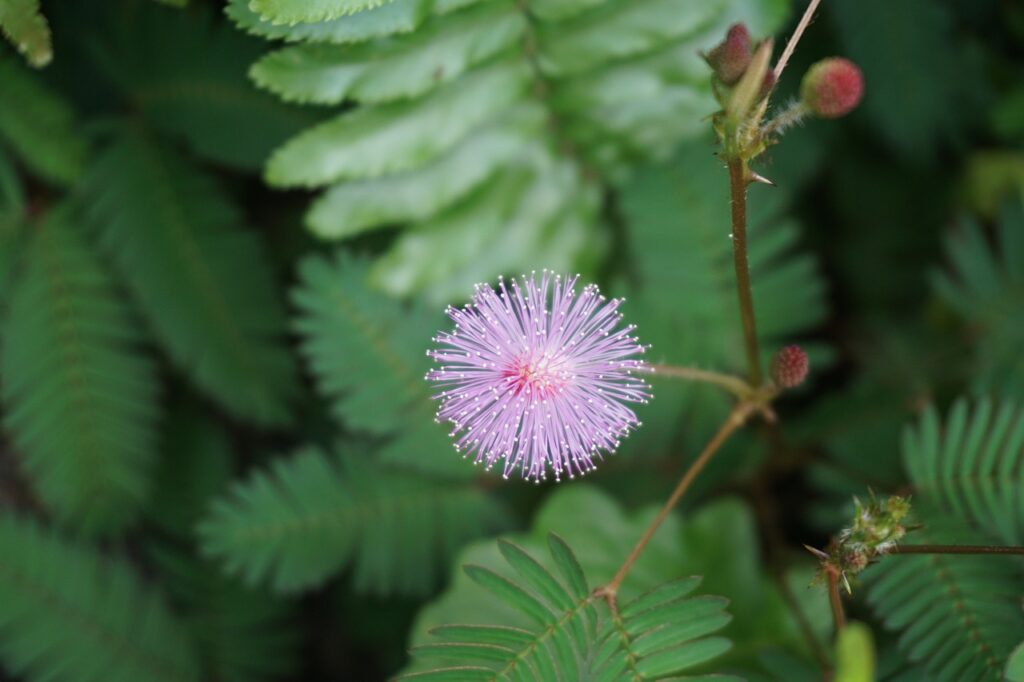 Design: The logical selection and arrangement of visual elements for order and interest.

Everything our eyes rest upon can be described as a design. For example, the veins in a leaf, the lines on a hand, or billowing clouds.

Even when we doodle or scribble, we can call these marks we make with our tools—pencils, sticks, fingers—designs!

It’s quite fascinating how our doodles can be identified within the twenty basic scribbles you see below:

Our doodles can also be seen within these eight basic diagrams:

Beyond, there are combinations and aggregates:

I recently had so much fun developing an artistic technique using construction caulking.  I called this new creation Caulk a Doodle Do.

Perhaps by now, you have come to realize you have been a designer all along. Artistic expression doesn’t have to fit into any type of box.

Some of my best students who attend my creative exploratory classes instinctively know how to move beyond boxes and just play. The people who feel most artistically challenged often forget one essential insight: Play!

Usually, the hesitancy to play is rooted in a judgment that art should exactly replicate physical reality. There is nothing wrong with reproducing what we see but it’s such a narrow, often arduous artistic path and can be a bit lonely.

Art is the desire of a man to express himself, to record the reactions of his personality to the world he lives in.” — Amy Lowell

I like that quote. Through art, personality is revealed. I bet if you examine some of your favorite art pieces you’ll notice how those artist’s interpretations are reflected within your perceptions. That’s what makes art so personal and so freeing.

Art is discovery, art is playfulness, art is desire manifested into form. 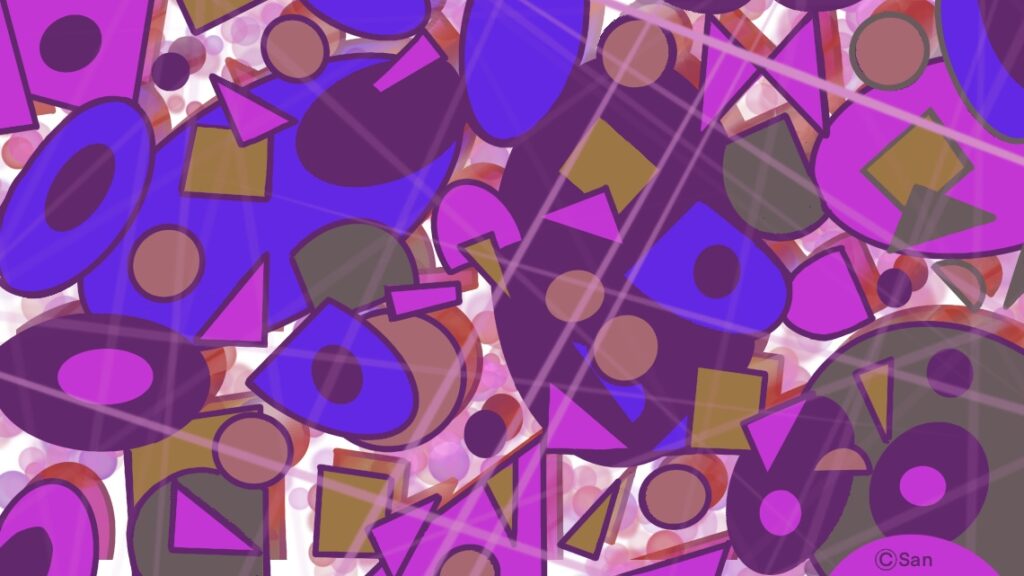 My hope is this Graphic Design Basic Element Series will open the door so you may begin to explore your unique creative eye by tuning up your vision. No matter what medium, choose to express yourself, remember you are a creator by nature waiting for self-validation. Making a mark is the first step.

In a way, an artistic expression is a form of self-love. Today is as good a day as any to begin a practice to free your creative spirit.

In the second tutorial post of this series, I’ll cover the Basic Design Descriptions & Shapes. I hope to meet you there!

Please visit the Art & Design Table of Contents to follow each series in its order.

“The object of art is not to reproduce reality, but to create a reality of the same intensity.” — Alberto Giacometti

Are you ready to break out your creativity in the New Year?

In my first, Free Design Tutorial post, I introduced thirteen perfect colors (plus black and white) to build a rich artistic painting palette. As you practice painting with this palette you’ll also be training your brain to identify color intensities and how they work to build realistic depth.

The pigments in these colors perfectly mix when painting watercolors, oils, acrylics. The next several posts will include easy-to-follow formulas that detail mixing directions according to where they are going to be applied.

The palette consists of seven bright colors for building depth in the foreground and middleground when they are used correctly with the six dull colors. The dull colors are used in the background. 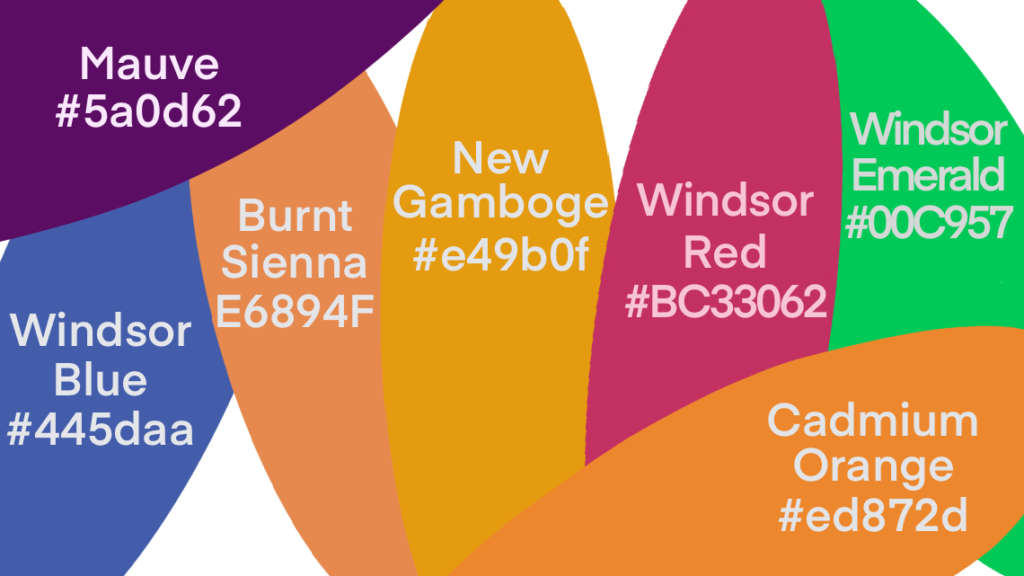 Tip: Be sure and purchase higher quality paints. Sometimes the cheaper paints are not mixed in proper portions and they may lack luminosity.

I have included a six-digit combination of numbers, which is called a HEX code or reference, that represents the letters and numbers that define the mix of red, green, and blue (aka “RGB”).

This is the most accurate shorthand sequence so you won’t have to figure out the RGB values. There are plenty of free conversion tools online if you want to learn more about how the codes are created.

If you create digital art, the HEX codes can be entered into most painting programs to form your palette.

The seven bright colors are:

The Six Dull Colors Plus Black 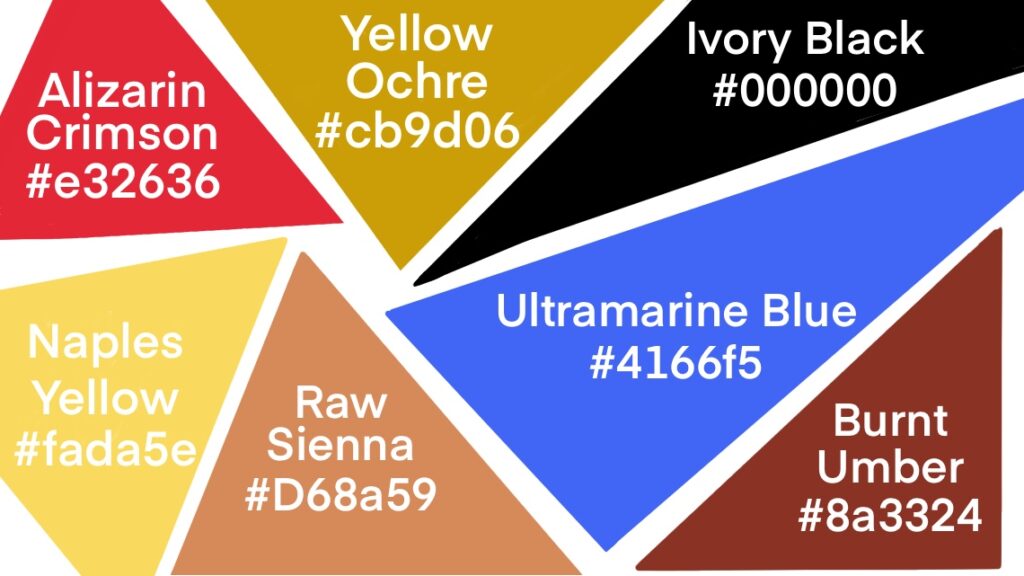 Most of the color names in this palette are universal. Alizarin Crimson is sometimes referred to as Rose Madder. Mauve may differ in hue between different manufacturers, so seek the richest color of Mauve or pick one that matches the RGB code for the color I have specified.

The six dull colors, plus black are:

A Note About White: I haven’t listed white as one of the colors. But also pick up a tube of bright white or a specific white that is designed to work with your chosen brand and medium.

In the next Free Design Tutorial post you’ll receive a guide for setting up your palette. It makes mixing colors easy and includes a tonal range key for creating the sky and clouds.

Table of Contents for the Perfect Palette Series

Curious people often ask me when I knew I was an artist. The answer is not a simple one and so the story goes:

When I was in my late 20’s, I had no idea that my life would eventually take a huge creative turn in my 30s. I was busy learning about life, relationships, and how to find my place in an ever-changing world. Throughout my hippie years–from ‘68 to around ‘75–peace, love, and freedom were at the forefront of my heart and mind.

I am very grateful I lived during this innovative time. The hippie uprising embedded the value of kindness and a deep belief that we are all inner connected at the soul level. It was obviously a time of vast artistic expansion in all corners of our culture. Music, art, media, clothing, haircuts, architecture, home decor…all these influences and more were creatively revolutionized.

During the early ’70s, I dabbled in creativity but it was just an afterthought. Remember those embroidered hippy jeans? Or the halter tops made out of doilies? Yep, that was me. I’d sit at my sewing machine, smoke a doobie, and “just make up” clothing designs. Money was always tight and I really didn’t know what a “maker” was but I was already demonstrating an interest in creating something from nothing.

The Nuts and Bolts of the Early 80s

Then in the late ’70s, my life took a turn. I had tried out marriage for a brief time but it didn’t take me long to learn I married for the wrong reasons. Jumping forward a few years to 1979, circumstances lead me to a major pivot point.

I was working in a job where I was required to lift and bend all day. You have to understand I am only 5’1” and weighed about 110 pounds at the time. I was fit, but the repetition my work required lead me to experience a long-lasting back injury. I could no longer work a regular job and I spent a year visiting the doctors and practicing physical therapy.

Because I acquired an on-the-job injury, vocational rehabilitation programs were available. I was accepted into a program that allowed me to go back to school. I had to choose an interest where I could sit rather than stand. One choice was a course on isometric and technical illustration that included basic 2-dimensional graphic design. The idea was to get me career-qualified for a job at Boeing where I could make a decent income.

I did remarkably well during that year and a half in school, which was a nice surprise. I had no idea I had talent in that area. Down the hall from our classroom was a Washington State Department of Vocational Rehabilitation office. This is where I would check in weekly and hand in my progress reports.

The people in the office were very kind and supportive. They truly took an interest in my hard work and accomplishments. At the end of the course, they could see I had excelled. One day at the end of the course before graduation, they called me into their office for a serious conversation.

Before telling you what was discussed, I need to include that both my instructors were graduates of the Burnley School of Professional Art on Capitol Hill in Seattle. This school was a Seattle landmark and had a reputation as one of the best schools on the west coast for learning art and design.

It was now 1982 and one of my instructors was actually teaching at Burnley at the same time. Both my teachers would share stories about Burnley, the eccentric instructors, and the Burnley ghost who was reported to haunt the halls. They also discussed how hard students worked and how a career in commercial art could open so many doors. I began to dream of attending. Working at Boeing just didn’t sound very exciting to me. But financially, there was no way I could afford five semesters of books, supplies, and the course fees.

OK, getting back to the day I was called in for that serious conversation. I had no idea what they wanted to discuss other than my graduation and grades. I sat down in the chair across from my vocational counselor. He smiled and congratulated me for doing so well! Then he asked me what I wanted to do now that I could apply at Boeing. I hemmed and hawed and said how grateful I was for everything I learned. Then he interrupted me.

So, I see here how well you did and we want you to know how happy we are about that. Have you ever thought about continuing your education?”

Hmm, I was a little confused. This isn’t the conversation I thought we were going to have.

Gary and Tom (my instructors) tell me you would like to go to Burnley. What are your feelings about that?”

I explained to them it sounded like a life-changing direction but I had no way to pay for it. And then came the what-ifs.

What if we could help you?”

OMG, I thought and I responded with a big, “What?”

I felt like I was on a cloud. It had been a challenging few years and this was certainly the silver lining. I stated I had no idea how I would manage it but absolutely I would figure it out!

An Artist Was Born

So this is my story on how I became an artist! I completed the full course studies at Burnley and graduated in ‘86. I can still say that hurting my back was a blessing. It brought me to make choices that lead to some of the best years of my life.

After all this, I still had a bit of that hippy spirit. I didn’t decide to apply for a job in the commercial art field. Rather, my bohemian spirit led me to start a line of hand-painted silk scarves and blouses. I’ll save that story for another time.